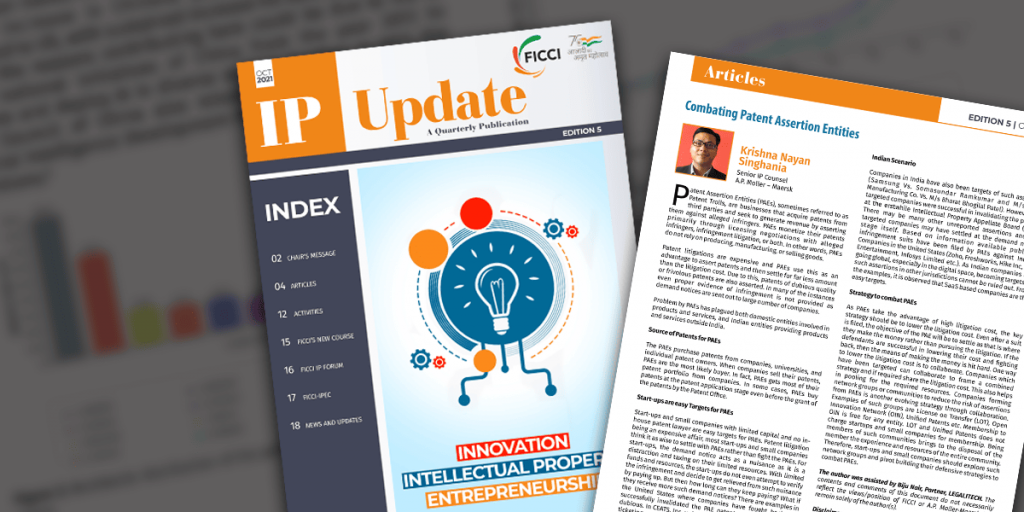 Patent Assertion Entities (PAEs), sometimes referred to as Patent Trolls, are businesses that acquire patents from third parties and seek to generate revenue by asserting them against alleged infringers. PAEs monetize their patents primarily through licensing negotiations with alleged infringers, infringement litigation, or both. In other words, PAEs do not rely on producing, manufacturing, or selling goods. Patent litigations are expensive and PAEs use this as an advantage to assert patents and then settle for far less amount than the litigation cost. Due to this, patents of dubious quality or frivolous patents are also asserted. In many of the instances even proper evidence of infringement is not provided as demand notices are sent out to large number of companies. Problem by PAEs has plagued both domestic entities involved in products and services, and Indian entities providing products and services outside India.

Source of Patents for PAEs

The PAEs purchase patents from companies, universities, and individual patent owners. When companies sell their patents, PAEs are the most likely buyer. In fact, PAEs gets most of their patent portfolio from companies. In some cases, PAEs buy patents at the patent application stage even before the grant of the patents by the Patent Office.

Start-ups are easy Targets for PAEs

Start-ups and small companies with limited capital and no inhouse patent lawyer are easy targets for PAEs. Patent litigation being an expensive affair, most start-ups and small companies think it as wise to settle with PAEs rather than fight the PAEs. For start-ups, the demand notice acts as a nuisance as it is a distraction and taxing on their limited resources. With limited funds and resources, the start-ups do not even attempt to verify the infringement and decide to get relieved from such nuisance by paying up. But then how long can they keep paying? What if they receive more such demand notices? There are examples in the United States where companies have fought back and successfully invalidated the PAE patents as the claims were dubious. In CEATS, Inc. v. Continental Airlines, Inc., airline, and ticketing companies were successful in invalidating CEATS online seat selection patent as Expedia offered similar option way before the patents were filed. In Versata Software Inc v. Zoho, the Versata patent on a method of presenting information in a space constrained display was invalidated on the basis that
the first portable computer did the same. Furthermore, Zoho was successful in recovering $60,000 as litigation costs from Versata.

Companies in India have also been targets of such assertions (Samsung Vs. Somasundar Ramkumar and M/s Aditi Manufacturing Co. Vs. M/s Bharat Bhogilal Patel). However, the targeted companies were successful in invalidating the patents at the erstwhile Intellectual Property Appellate Board (IPAB). There may be many other unreported assertions and the targeted companies may have settled at the demand notice stage itself. Based on information available publicly, infringement suits have been filed by PAEs against Indian Companies in the United States (Zoho, Freshworks, Hike Inc, Zee Entertainment, Infosys Limited etc.). As Indian companies are going global, especially in the digital space, becoming targets of such assertions in other jurisdictions cannot be ruled out. From the examples, it is observed that SaaS based companies are the easy targets.

As PAEs take the advantage of high litigation cost, the key strategy should be to lower the litigation cost. Even after a suit is filed, the objective of the PAE will be to settle as that is where they make the money rather than pursuing the litigation. If the defendants are successful in lowering their cost and fighting back, then the means of making the money is hit hard. One way to lower the litigation cost is to collaborate. Companies which have been targeted can collaborate to frame a combined strategy and if required share the litigation cost. This also helps in pooling for the required resources. Companies forming network groups or communities to reduce the risk of assertions from PAEs is another evolving strategy through collaboration. Examples of such groups are License on Transfer (LOT), Open Innovation Network (OIN), Unified Patents etc. Membership to OIN is free for any entity. LOT and Unified Patents does not charge startups and small companies for membership. Being members of such communities brings to the disposal of the member the experience and resources of the entire community. Therefore, start-ups and small companies should explore such network groups and pivot building their defensive strategies to combat PAEs.

The author was assisted by Biju Nair, Partner, LEGALITECH. The contents and comments of this document do not necessarily reflect the views/position of FICCI or A.P. Moller-Maersk but remain solely of the author(s).

Disclaimer: This article contains the views of the author alone.

We see incredible value in the Free and Open Source Software (FOSS) communities. Our work in collecting, preserving and making source code available to developers, academics and government entities, will enable developers to continue to innovate. We are very pleased for OIN’s sponsorship and its support in maintaining the technical and scientific knowledge that may be lost without preservation and may be further useful to developers from an intellectual property perspective.

We believe the protection OIN offers the open source community helps increase global contributions to and adoption of open source technologies. We are honored to stand with OIN as an active participant in its program to protect against patent aggression in core Linux and other important OSS technologies.

UNISOC is committed to the independent development and design of core chips in the field of mobile communications and AIoT, and Linux and open source software are the key elements of our technology development. By joining the OIN community, Zhanrui demonstrates its strong commitment to innovation and will continue to support patent protection for projects such as Linux.

Open source technology enables new levels of innovation and helps to underpin our ongoing growth, as we fuse physical and digital technologies in cyber-physical systems. By joining OIN, we are demonstrating our commitment to contribute to open source technology and supporting it with patent non-aggression in Linux.

The OpenWrt developers believe that openness and collaboration across domains is the groundwork which nurtures Linux development. The new partnership with Open Invention Network will be one of the building blocks pushing OpenWrt forward and advance Linux innovation in general.

As a global solutions provider that grows with customers and society through the highest level of trust, SMFG is committed to creating businesses that transcend the boundaries of finance and resolving issues. In order to further promote this effort and quickly deliver high added-value services to our customers and society, SMFG believes that the utilization of open source software will be essential. Also, in promoting OSS utilization, SMFG believes that measures to protect intellectual property rights are important. Through joining the OIN, SMFG hopes to deepen our understanding of the OSS community and contribute to the development of OSS.

Huawei is committed to offering the highest-quality ICT and smart devices. Linux and OSS are critical elements of technologies we are developing and integrating with carriers and enterprises around the globe. By joining the Open Invention Network, we are demonstrating our continued commitment to innovation, and supporting it with patent non-aggression in Linux and other core open source projects.

Protecting open source is critical to us, our users and to the ongoing health of the Internet. We’re proud of our new role within OIN. We’re very happy with the direction OIN has been going.

At Rakuten, our businesses continue to evolve as we address new market opportunities. Because of this, we are a user and strong advocate of open source software. We are building the first 100% fully virtualized mobile network, enabling us to scale rapidly and offer the best Quality-of-Service (QoS) available. By joining OIN, we are demonstrating our commitment to Open Source Software (OSS) and supporting it with a pledge of patent non-aggression.