Linux Defenders is a manifestation of the commitment that OIN has made to protect its community and core Open Source Software from patent aggression.  It is an umbrella concept encompassing the many ways that OIN and its partners are working to eliminate low-quality patents, which are frequently leveraged by strategic patent aggressors and patent trolls. Specifically, OIN works in the following ways to support its community members and the broader Open Source community.

In many cases where one of our community members was the subject of patent infringement claims, Open Invention Network has leveraged our network of relationships to identify and share prior art for use against patent trolls or corporate patent aggressors. This helps OIN licensees at risk, or in litigation, to better defend against Linux-centric patent aggression.

Open Invention Network has been a leading user of third party pre-issuance submissions, which are prior art submissions to limit the claim scope, or secure outright rejection, of overly broad patent claims in patent applications which are focused on key technology areas relevant to Linux and adjacent open source technologies.

“Inter Partes Review”, also known as an “IPR”, is a procedure for challenging the validity of an issued patent owned by a 3rd party. By challenging patents with IPRs, the Linux and broader Open Source community can help to eliminate them. Unified Patents — which OIN, IBM, Linux Foundation and Microsoft support through its Open Source Zone —has successfully invalidated several patents using IPRs.

Defensive publications are documents that provide descriptions and artwork of an invention so that it enters the public domain and becomes prior art. The disclosure prevents other parties from obtaining a low-quality patent (or, a non-novel patent) on the same invention later. OIN encourages all Open Source community members to submit inventions as defensive publications for free at tdcommons.org. 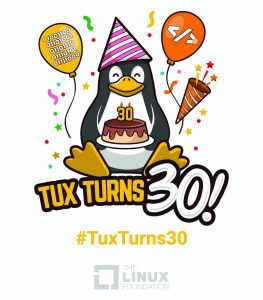 A penguin has been a symbol in the Open Source community for 30 years!

Known as Tux, the concept of a penguin as the Linux brand character concept came about in 1991, according to the Linux Foundation. Larry Ewing created and 1st publicly introduced Tux in 1996 as an entry to one of three Linux logo competitions. Ironically, he didn’t win any of them. Tux has been further refined by Linus Torvalds, the creator of Linux, which has been free and Open Source Software (OSS) since its inception.

The penguin icon has had a long-lasting impact in popular culture throughout the world. He has appeared in video games, ads, games and comics. He has also been an avatar and squeaky toy and monument, among other things.

Today, Tux is the official brand symbol of the Linux kernel, which is the core of Linux and other Operating Systems (OS) such as Android and Chrome OS. Tux is the most used icon for Linux, although different Linux distributions depict Tux in various styles. The character is used in many other Linux programs and as a general symbol of Linux.

According to the Linux Foundation, 100% of the world’s Top 500 supercomputers today run on Linux. It is also trusted by the United States National Aeronautics and Space Administration (NASA) and the Jet Propulsion Laboratory (JPL) to run a helicopter on Mars. Furthermore, 9.3% of the world’s top 1 million servers run on Linux and 90% of all cloud infrastructure operates on Linux and practically all the best cloud hosts use it.